“The implications surrounding our responsibility to live, and live sensuously, are at the heart of The Ambassadors.” Colm Toibin, Guardian, ' A book that changed me'

“The implications surrounding our responsibility to live, and live sensuously, are at the heart of The Ambassadors.”
Colm Toibin, Guardian, ‘ A book that changed me’ 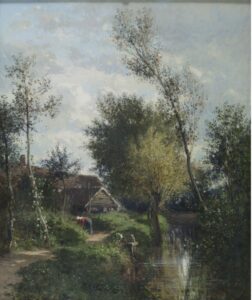 The countryside near Paris painted by Emile Lambinet

‘Strether’s first question, when he reached the hotel, was about his friend; yet on his learning that Waymarsh was apparently not to arrive till evening he was not wholly disconcerted.’

These are the opening words of The Ambassadors, the first of Henry James’ final trio of completed novels. Written when James was in his early sixites, it is often thought to be his most autobiographical book. The central character, Lambert Strether, a 55 year old American, experiences a serious life crisis when he is sent on a mission to the dangerously seductive European city of Paris. Faced with the dawning realisation that he may have missed out on some of the most important things in human life, he is forced to consider a seemingly endless cascade of questions. His bewilderment is portrayed via a detailed exploration of his inner world, combined with a series of vivid, humorous scenes in which he encounters a variety of characters, both American and local. The basic plot of a rather naïve (for his age) American in an alluring but ultimately corrupt metropolitan European context will be familiar to readers of Henry James, as will the fact that it is the women who are the strong characters directing the course of events.

Responses to the book over the years have been many and various. Henry James himself wrote: ‘I am able to estimate this as, frankly, quite the best, “all round”… of all my productions’. Professor Sarah Churchwell (who also wrote the introduction for the Everyman edition) was a fierce advocate when she chose it for BBC Radio 4’s ‘A Good Read’ (click here, discussion starts 10 minutes in). The consensus of modern opinion is that James’ final novels represent his finest achievement. Why not join us to find out what you think?

“For the uninitiated, and even for those who are familiar with the famous author, encountering the late novels of Henry James can be both exasperating and exhilarating. For Keith Fosbrook, this is all part of the pleasure of accompanying fellow readers on the adventure . . . I have read three of James’s novels with Keith in the last six months and I am looking forward to reading another one later this year.”
LLS participant, Barry Fernald

Opening notes will be sent shortly after registration. If you have any questions about this study or payment please contact us.

Long Ago and Far Away: The Norse