HENRY JAMES: The Europeans and Daisy Miller The Europeans – ‘flimsy’ [William James]... ‘performance rather than actual feelings’ [contemporary critic] or ‘a masterpiece 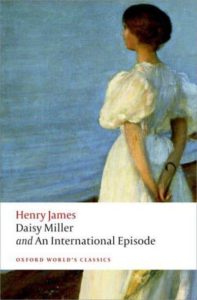 Whether as an entrée for those who have found the Henry James of the mature novels hard to digest, or as a lighter course for existing consumers, this salon focuses on two shorter works by James. Both published in 1878, The Europeans is a relatively rare example of James’ offering a view of American manners by European visitors, while Daisy Miller is an often overlooked gem about an American ingenue getting out of her depth in Italy.

This three-week salon will offer an opportunity to consider some of the issues which feature more extensively and thematically in James’ full-length novels: the collision of ideas of freedom and convention, sexual repression and liberation, innocence and corruption, deceit and honesty, and naivety and sophistication.

To register, please use the Paypal button below to pay £80 for this three- meeting study. Upon receipt of payment, I will send you the opening notes, resources and preparation suggestions.

“Well,” said Winterbourne, “when you deal with natives you must go by the custom of the place. Flirting is a purely American custom; it doesn’t exist here. So when you show yourself in public with Mr. Giovanelli, and without your mother—” “Gracious!”
― Henry James, Daisy Miller