This supernatural soliciting Cannot be ill, cannot be good: if ill, Why hath it given me earnest 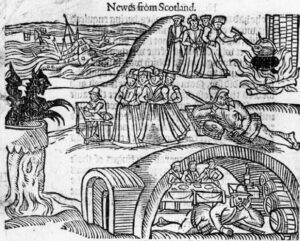 This supernatural soliciting
Cannot be ill, cannot be good: if ill,
Why hath it given me earnest of success,
Commencing in a truth? I am thane of Cawdor:
If good, why do I yield to that suggestion
Whose horrid image doth unfix my hair
And make my seated heart knock at my ribs,
Against the use of nature? Present fears
Are less than horrible imaginings:
My thought, whose murder yet is but fantastical,
Shakes so my single state of man that function
Is smother’d in surmise, and nothing is
But what is not.

Macbeth is believed to have been written in 1605, two years after King James VI of Scotland – the son of Mary Queen of Scots –  became James 1 of England, succeeding the childless Elizabeth I and creating a personal union of the two kingdoms.

The presence of the saintly King Duncan and the character of Banquo – thought to have been a forebear of James – all indicate that this was a play designed to impress the new monarch, and it launched Shakespeare’s newly-renamed company of players, The King’s Men.

James himself was an author: amongst his published works, Daemonologie (1597) examined contemporary necromancy and the historical relationships between the various methods of divination used from ancient black magic. It also touched on the methods demons used to bother troubled men. James’s purpose was to educate a misinformed populace on the history, practices and implications of sorcery and the reasons for persecuting a witch in a Christian society. Daemonologie is believed to be one of the main sources used by Shakespeare, who attributed many quotes and rituals found within the book directly to the Wyrd* Sisters. For the play’s Scottish themes and settings, he also drew heavily on descriptions in the book of the North Berwick Witch Trials in 1590, which James had attended.

And so, as the Shakespearean scholar Emma Smith puts it, “Our first introduction to the imaginative world of the play is one in which supernatural agents hold some kind of sway.”

To register,  please use the Paypal button below (one for previous Salon participants, one for first timers)          Upon receipt of payment, I will send you the opening notes, resources and preparation suggestions.

Julie Sutherland is co-facilitating with Jane for this study. She is deeply interested in the capacity of literature—both read and in performance—to effect change in the human spirit. She has taught Shakespeare to university students in Canada and the UK and regularly facilitates ‘reading for well-being’ workshops in Shakespeare and other literature for the ReLit Foundation. She also works in-community with others who share her desire to bring the Bard to life.

Like Hamlet (“Who’s there?”) Macbeth begins with a question:

“When shall we three meet again?”

These are the Wyrd Sisters on the blasted heath. When that meeting happens – “In thunder, lightning or in rain?” –  they will meet with Macbeth. How do they know he will be there? Is he their puppet – or have they been summoned by Macbeth’s unacknowledged desires?

Again, as in Hamlet, the murder of a king is key. But in this case the killer has moved centre stage and we meet him before the dreadful deed is done. But having first seen the Wyrd Sisters we must decide whether Macbeth, like Claudius, commits the crime because of his own ambition or whether he is being directed by supernatural forces. Let us note here another comment by Emma Smith, who tells us that Macbeth shares with its contemporary work, Robert Burton’s Anatomy of Melancholy (1621) an aim to “investigate the human mind, and a curiosity about the causes and explanations for feelings and behaviours.”

This question of who holds agency in Macbeth is one we will explore in our 8-session reading and discussion of the play, as well as its themes of loyalty, guilt, innocence and fate – and, of course, ambition and its consequences.

*Modern English spelling was only starting to become fixed by Shakespeare’s time and the word ‘weird’ (from Old English wyrd, fate) had connotations beyond the common modern meaning. The Wiktionary etymology for “weird” includes this observation: ‘[The word] was extinct by the 16th century in English. It survived in Scots, whence Shakespeare borrowed it in naming the Weird Sisters, reintroducing it to English. The senses “abnormal”, “strange” etc. arose via reinterpretation of “Weird Sisters” and date from after this reintroduction.’

The Bible as Literature: One-meeting taster

Within a Budding Grove - Vol. II Proust's A la recherché...