The legend of the Trojan War is one of the most enduring stories in our culture, inspiring some of our most creative 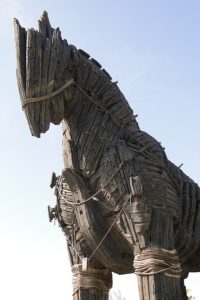 The legend of the Trojan War is one of the most enduring stories in our culture, inspiring some of our most creative and moving literature and art—from Homer to Shakespeare to Joyce and the present day. The famous Golden Apple and the Trojan Horse are familiar to most everyone, along with the names of Achilles, Odysseus, Hector and Aeneas—and, of course, the ever-enigmatic Helen at the centre of it all.

After 3000 years, Troy and the Trojan War continue to inspire retellings and alt-tellings. Here in 2020, you’ll find at least three current bestselling novels in bookstore windows based on the war and its aftermath, and a steady stream of new translations of Homer’s Iliad and Odyssey receives prominent attention. From Homer’s time onward, the Trojan War has provided a setting for stories of heroism, glory and conquest—and even more often of grief, sorrow and loss.

This Salon study follows on from the  British Museum’s 2020 special exhibition Troy: Myth and Reality. Over the eight weeks of this study, we’ll explore the continuing fascination of Troy, through discussions of five works of literature that span the breadth of the Trojan War story, and a close look at images of key objects from the Troy exhibition.

Central to the myth of Troy is Homer’s Iliad, which we’ll read over four sessions; we’ll also read the Classical Greek plays Iphigeneia at Aulis and The Trojan Women, both by Euripides, and Philoctetes by Sophocles; we’ll finish the study with a modern contribution to the Troy legend, the very well-reviewed novel The Silence of the Girls, by Pat Barker. To round out the study we’ll look at excerpts from ancient source texts that tell the stories of the Golden Apple, the attempts by various heroes to avoid the war, the Trojan Horse, the death of Achilles, and numerous other variations on the Troy myth.

TO REGISTER for the study, please use the secure Paypal payment button below to pay £180. Opening notes will be sent shortly after registration.

ABOUT THE FACILITATOR: Mark Cwik has been organizing and leading great books discussion groups for adults for over twenty years in London, Chicago and Toronto. He was trained as a discussion facilitator while at the Great Books Foundation in Chicago and has been a passionate advocate for great books education since attending St. John’s College, Santa Fe and the University of Chicago Basic Program in Liberal Education.

“I’ve been coming to Mark’s discussion groups for about 15 years . . . Mark is amazing in his ability to keep the group functioning smoothly. He asks questions that get to the heart of the piece and he keeps the group focused on those questions. You don’t feel that he’s trying to steer us to any conclusion; he’s in it with us to figure out what the author is saying. He makes everyone feel welcome and their opinions are respectfully heard. He’s always prepared and totally dedicated to advancing our understanding of the great books.” — Chicago group participant.